Hook Before Header
Hook After Header

STF postcard no 38 – THE KINGS STONE IN SJÖARED

”The kings stone in Sjöared”, is not very impressive on STF’s postcard. Why this grandiose name for a small stone at a small gravel road?
I began searching for information and soon I found not less than  3 ”King stones in Sjöared”! The stone on STF’s postcard, the stone on Knäred’s website and the stone in Ulvsbäck’s rectory’s garden. (Have a look at the pictures here beside.) How could this be?
Joel Wangö, teacher and researcher in lokal history, from Knäred, wrote an article in the museeum for the county of Halland’s book over the year 1968 where he outlined a history that maybe can be true.
The kings stone on STF’s postcard should then be the stand for the stone table where Gustav II Adolf and Christian IV signed the pease in Knäred, Junuary 20, 1613.
”The tabletop” for this stone table should then be the stone now placed in the garden for Ulvsbäck’s rectory. The tabletop should have been stolen/moved to this place in the beginning of the 1700s and at that time have been provided with the inscription describing a later meeting between kings.
The third kings stone is a memory stone raised by the museum for Halland, 1925. 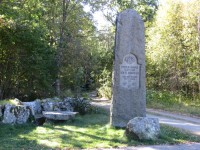 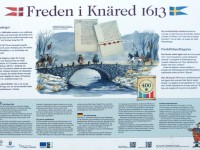 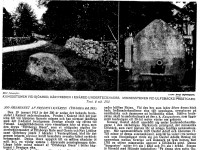 Back to STF – the postcards

Hook Before Footer
Hook After Footer